Bitcoin May Continue to Face Headwind after Plunging to $53,500

Bitcoin, the world’s largest cryptocurrency, plummeted to as low as $53,500 at 8:00 UTC on May 11. Currently, its price has relatively rebounded. At the time of writing, Bitcoin bulls are not strong enough to defend the $55,000 support level and BTC is trading at $54,727.

According to Coinmarketcap, Bitcoin (BTC) decreased by 6.48% during the sell-off within 24 hours. At the same time, other mainstream currencies also suffered losses. After breaking through the $4,000 mark and hitting an all-time high of $4,209, Ethereum quickly fell back below $4,000, touching $3,665 momentarily.

The three major indexes of the US stock market as a whole suffered major losses yesterday. The soaring commodity prices have triggered concerns about global inflationary pressures in the market. Nasdaq Composite index fell by 2.55%, led by a plunge in Tesla, down by 6.44%.

The U.S. S&P 500 lost 1.04% Monday, while the Dow Jones Industrial Average performed relatively better, down only 0.10% to close the day. 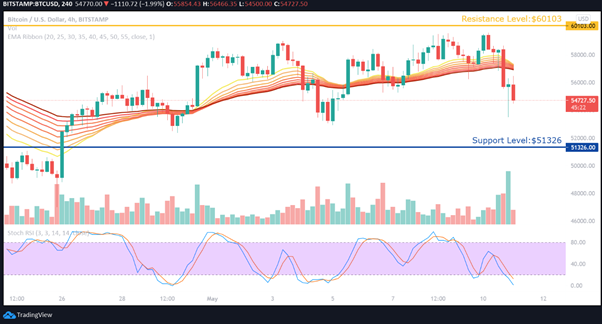 Bitcoin’s price has fallen below the Exponential Moving Average ribbon. However, the current bull market will not end as the majority of altcoins hit new highs, indicating that investor sentiment is still positive towards the cryptocurrency market.

The data shows that Bitcoin whales have accumulated a large number of positions between $54,000 and $58,000.

Bitcoin whale refers to any wallet holding 10,000 BTC or more of Bitcoin. 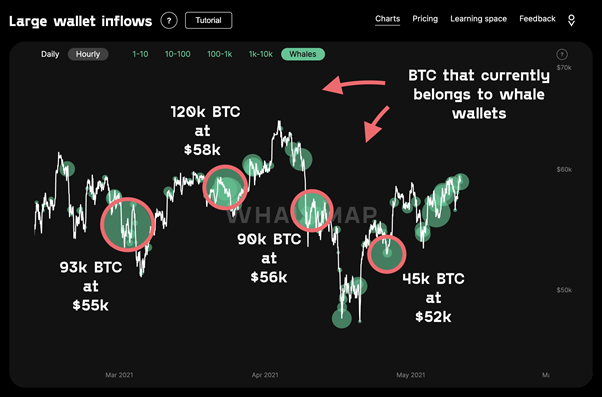 According to data from the on-chain data provider Whalemap, the lowest concentration of Bitcoin whales is around $52,000, with a total of 45K BTC. Existing whale behaviour indicates that $52,000 may be the current floor price of Bitcoin.

BAYC Owner Scammed for NFTs Worth $567K with Fake PNGs

Thunderous Rally for Cosmos-Based Altcoin Is Not Over Yet, According to Top Analyst Michaël van de Poppe

Solana (SOL) & Cardano (ADA) Explode In Price, Will Caprice Finance (CFT) Be Next?