Over the weekend, Ethereum (ETH) scaled new heights by hitting an all-time high of $2,159.

Its momentum is not showing any signs of relenting because it has soared to $2,185 at the time of writing, according to CoinMarketCap.

Santiment attributes this trend to a drop in Ethereum’s average fees. The on-chain metrics provider explained:

“Another aspect that contributed to Ethereum’s AllTimeHigh this weekend was the fact that average fees have dropped back to a 5-week low. With fees back to an average of $11.08, this is the lowest since March 5th, allowing for increased ETH utility.” 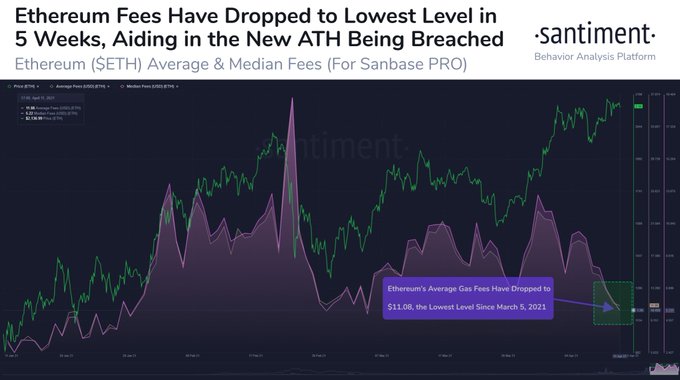 ETH has been grappling with the challenge of high gas fees, which at one point reached a level that made the decentralized finance (DeFi) sector ineffective. Moreover, they were beyond the reach of average users and traders.

Ethereum 2.0, launched in December 2020, is touted as a game-changer when tackling this problem because it seeks to transit the current proof-of-work consensus mechanism to a proof-of-stake framework, which is touted to be more environmentally friendly and cost-effective.

According to crypto data provider Glassnode, the number of non-zero ETH addresses has broken the record at 57 million. This signals that more participants are joining the Ethereum bandwagon, as evidenced by its current record-breaking moves.

For instance, the total value locked in ETH 2.0 recently surpassed the $8 billion mark, which is an indication that investors are betting big on this deposit contract.

Time will tell how Ethereum’s journey to the moon continues shaping up because its renewed upsurge is backed by various bullish fundamentals. For example, in March, payment giant Visa Inc. announced that it has settled for the Ethereum blockchain to undertake USDC transactions.

Visa disclosed that it had launched a pilot program with Crypto.com, a payment and encryption platform, and plans were underway to offer the USDC settlement to more partners later this year.

“Cryptocurrencies are the Future of Money, Bitcoin Is Not” says Economist

20% of American Adults Involves in the Crypto Space, Study Shows

ExxonMobil to Mine Bitcoin with Excess Natural Gas