in Ethereum
Reading Time: 5min read
A A
0

For many Ethereum holders, apart from popular price-tracking websites that cover a host of assets, those relatively new to the industry may be unaware of the blockchain explorers that track crypto movements. 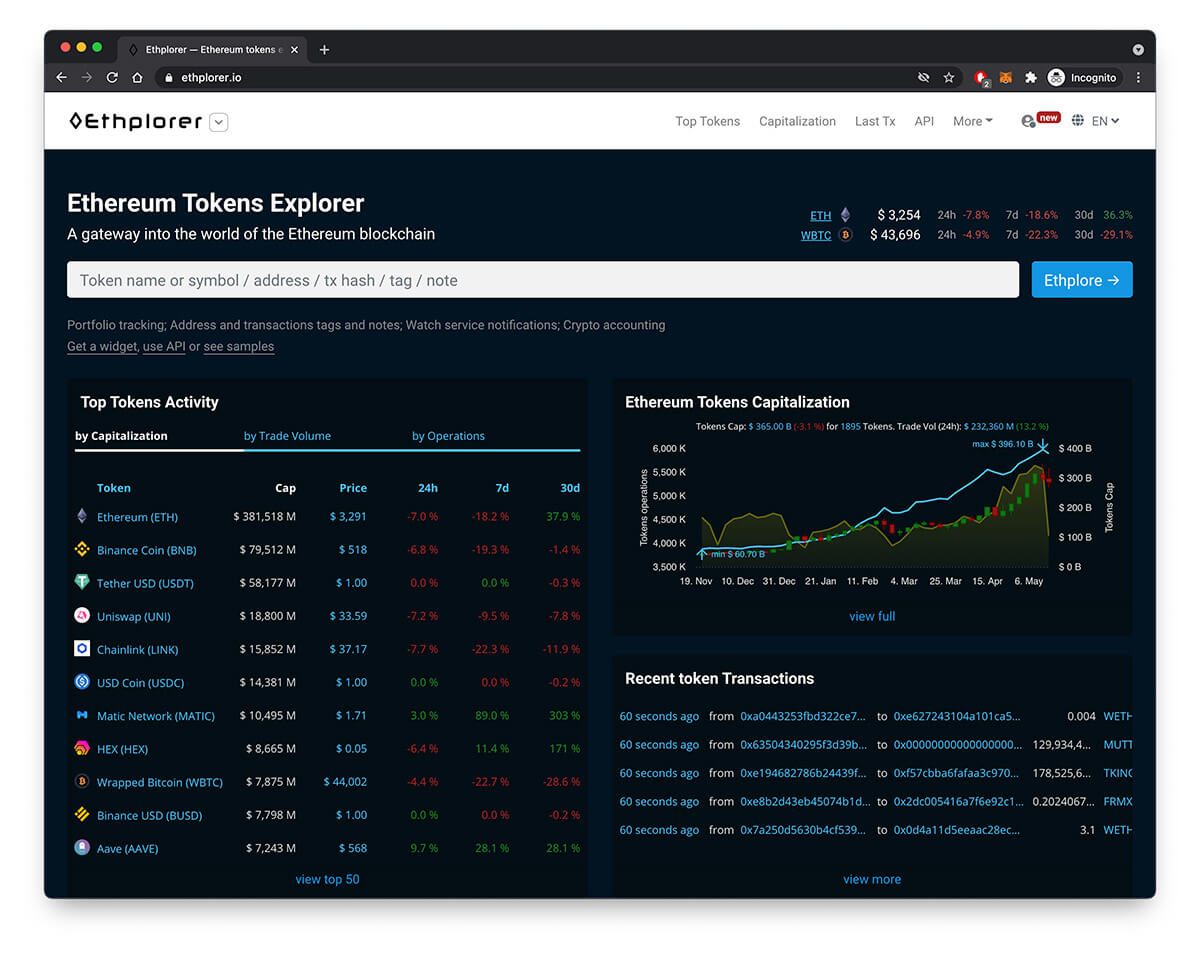 When the Berlin Hard Fork went live on Ethereum in April 2021, it caused a lot of other Ethereum explorers and platforms that operate on OpenEthereum to crash as nodes went down across the network. Ethplorer, however, remained unaffected by the upgrade as the platform doesn’t solely run on OpenEthereum. Easily accessible, Ethplorer allows users to track ERC tokens in real-time as well as compare the growth of various tokens over 24-hour, weekly, and monthly time periods.

Other features of Ethplorer include the option to track an infinite number of tokens or transactions for a list of Ethereum addresses, with the industry-first Bulk API monitor, which is more targeted toward developers. With this, there is the option to receive email or Telegram updates for any incoming or outgoing transactions. Catered more toward the regular crypto user is the Watching Service, which alerts a user to an inbound or outbound transaction that’s related to a particular address or smart contract. 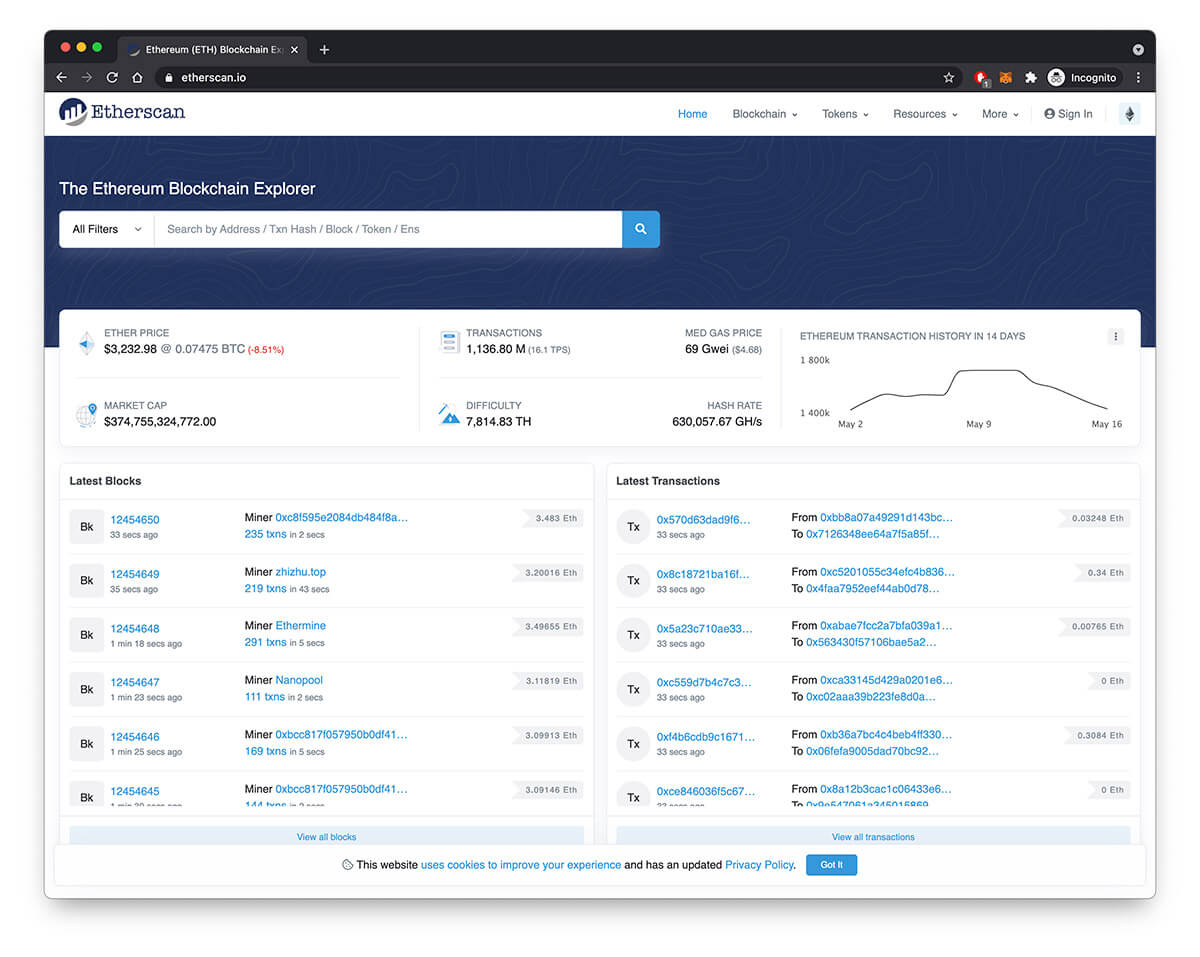 Etherscan is the most popular Ethereum explorer, and with a long list of features and useful tools, it’s easy to see why. With graphs that cover almost every measurable facet of the Ethereum network and with new features such as yield farming tools and token airdrops, Etherscan caters to all of your Ethereum exploration needs. Etherscan also features a DeFi leaderboard, with 32 listed, and a DEX tracker, which shows the transaction hash, the action involved, the amount, the swap rate, and the DEX it occurred on. For those keen to see the top statistics, there’s a page for this too with information spread across 24-hours, three days, or seven days.

Currently available in a beta version is EthProtect (Every Transaction Hash Protect), which is a detection system for Ethereum users designed to alert them to tainted incoming funds while tracing those funds back to their origin. Another piece of beta software is the Token Approvals feature — this enables a user to review and revoke token approvals for any dApp should there be any suspicious activity detected. 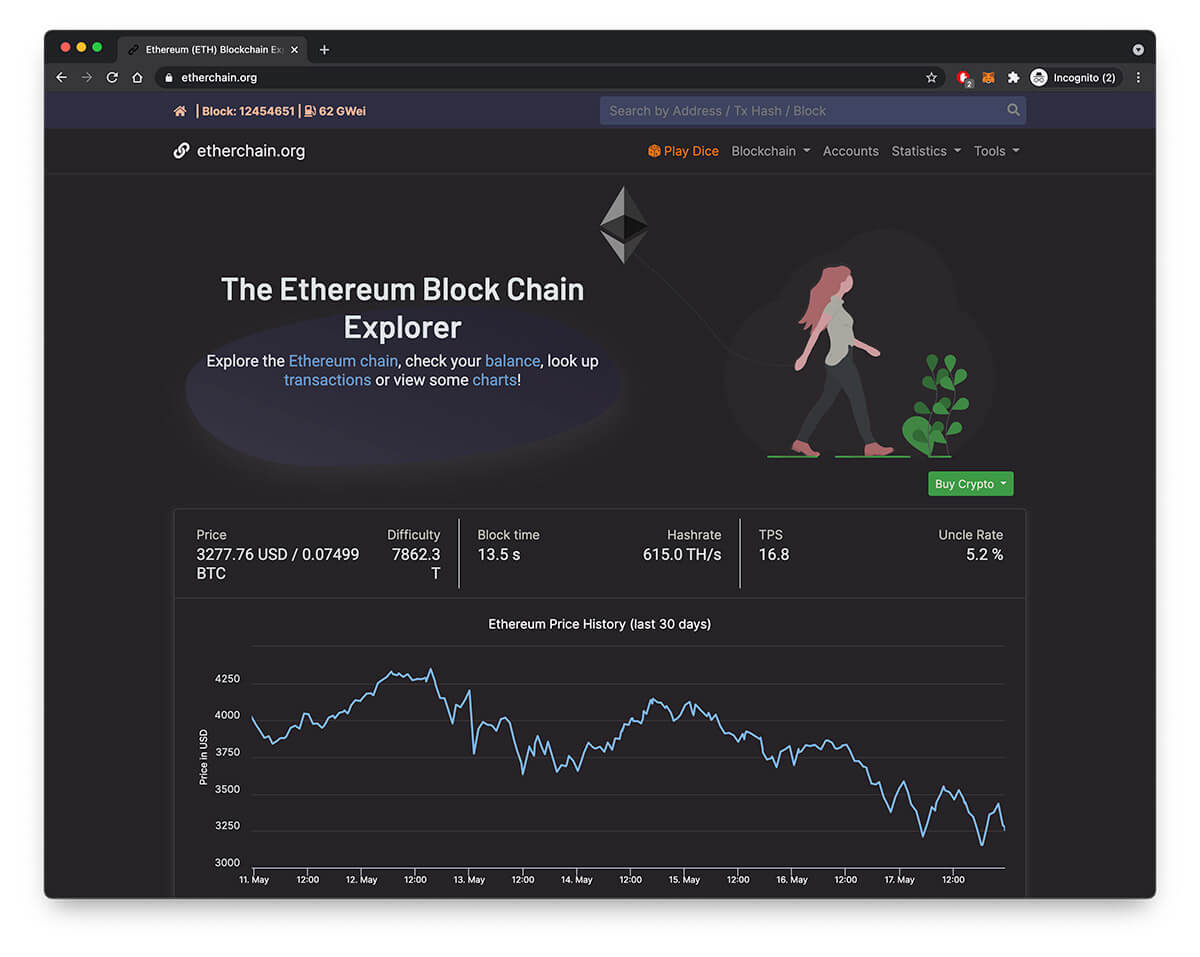 With its user-friendly interface, it’s surprising that Etherchain is not as well-known as the other two Ethereum explorers on the list. In addition to the UI, Etherchain has a number of useful tools. One of which is a unit converter, which allows users to enter other measuring units on the Ethereum network such as Wei, Szabo and Tether. Another feature is the gas price oracle, which projects the gas price that needs to be paid in order to get a transaction confirmed within a certain number of blocks.

There is also the option of exploring the Ethereum chain, looking up transactions, or viewing charts, which show movements in Ether’s total supply, block gas usage, mining rewards, uncle mining rewards, and blocks per day. Unlike the other two explorers, Etherchain does not have details of the top-performing ERC tokens, but it does feature useful charts, which show miner statistics and correlations between different variables.

Get an edge on the cryptoasset market

Access more crypto insights and context in every article as a paid member of CryptoSlate Edge.

Crypto Analyst Predicts 1 Altcoin Will Fall Down Hard – Is It Cardano?

Emirates Airline to Roll Out Bitcoin Payment and Enter the Metaverse

Crypto will come back stronger from this